Started from an escaped prescribed fire on May 4

Strong winds and low relative humidity caused a wildfire in the panhandle of Florida to grow about eight times its size Wednesday. The Five Mile Swamp Fire started from an escaped prescribed fire Monday afternoon and by Wednesday afternoon had blackened approximately 2,000 acres (up from 250 acres Wednesday morning) forcing the closure of Interstate 10 south of Milton, Florida.

The fire is burning on both sides of Interstate 10 about five miles south of Milton. The Florida Forest Service (FFS) reports several structures south of I-10 have been damaged or destroyed.

Residents of Ski Lane north of I-10, and those south of I-10 and east of Avalon Boulevard have been ordered to evacuate.

About 1,100 residences are threatened by the Five Mile Swamp Fire.

The prescribed fire from which the wildfire escaped was on private land east of the former Moors golf course, east of Avalon Blvd., and north of I-10. Described as a “#GoodFire” by the Florida Forest Service in a May 4 tweet, it was expected to burn only 250 acres.

🚨WILDFIRE UPDATE🚨@FLForestService crews are in day 3 of suppression efforts on the #5MileSwampFire. Additional firefighting personnel & resources are en route to assist.

A prescribed fire on the Cleveland National Forest in southern California escaped the intended project area on March 6 and burned an additional 20 acres. It occurred near the South Main Divide between Lakeland Village and a residential community west of the road.

The spread of the South Main Fire was stopped by 286 firefighters, 3 helicopters, and at least one S-2T air tanker.

The project was on private land, the Ben Delatour Scout Ranch

A five-page report described as an executive summary has been released for a prescribed fire that escaped on private land last fall in Colorado. As required by state law, the review was completed by a team of subject matter experts led by the Compliance and Professional Standards Office of the state’s Department of Public Safety.

The Nature Conservancy planned and executed the Elkhorn Creek Unit #4 prescribed fire that took place on the Ben Delatour Scout Ranch, private property located in Larimer County, Colorado 25 miles northwest of Fort Collins. It was part of a forest restoration effort aimed to reduce the impact of high severity wildfire on Elkhorn Creek, an important tributary of the Poudre River.

On day two of the project a spot fire occurred an hour after cloud cover moved out of the area. It was suppressed, but later two more ignited.

Below are excerpts from the report:

Located in dry, dead grass on a steep slope aligned with strong westerly winds, these two spots quickly grew together and began spreading rapidly away from the unit towards the Glacier View community to the east. Leadership personnel, quickly determining that on-site resources would not be able to contain the fire, immediately ordered ground and aerial resources and then declared the wildfire at 3:59 PM. In total, the fire burned 682 acres, with 118 acres outside of the planned boundaries of the project and 82 acres off the Scout Ranch property. One outbuilding was destroyed by the fire.

Recommendations for All Prescribed Fire Practitioners

2. Apply “lessons re-learned” from the factors and best practices identified as being common between this prescribed fire and previous prescribed fires that were later declared wildfires.

Recommendations for The Nature Conservancy

3. Evaluate and refine the collaborative burning approach, including considerations for additional cooperative or partnership agreements to increase the experience level below that of overhead or trainee positions on high consequence prescribed fires.

Recommendations for the Division of Fire Prevention and Control

5. Evaluate all DFPC statutory and policy frameworks and craft solutions to align with all three co-equal goals of the National Cohesive Wildland Fire Management Strategy.

The project was east of Vandenberg Air Force Base

A prescribed fire that was expected to be a three-day project escaped on day one Tuesday, burning an additional 10 to 20 acres in Santa Barbara County in Southern California. The BarM Ranch Vegetation Management Burn was planned to occur November 12 through 14 on the Bar M Ranch east of Vandenberg Air Force Base 4 miles southeast of Los Alamos along Highway 101.

Multiple fire engines and aircraft were brought in to stop the spread after it jumped control lines at about 3:45 p.m.

The burn was conducted on private land with the long range goal of reducing old growth vegetation and improving rangeland, while minimizing the impacts of smoke on population centers as it was being carried out.

The Elk Fire is 6 miles southeast of Red Feather Lakes

A prescribed fire at a scout ranch escaped control in Colorado on Wednesday forcing residents out of their homes. The Elkhorn Creek Forest Health Initiative and Nature Conservancy Colorado were conducting the “Elkhorn 4 Prescribed Burn” at the Ben Delatour Scout Ranch near Red Feather Lakes south of W. County Road 74e and road 68c.

Thursday morning the Larimer County Sheriff’s office reported that the fire, which was named Elk, had not grown much overnight. The total size of the incident was 622 acres which included 472 acres within the project boundary.

At noon on Thursday mandatory evacuation orders were still in place for Glacier View Gates 7 through 13. One shed has been damaged and 50 homes are threatened.

The Elk Fire is in north-central Colorado 6 miles southeast of Red Feather Lakes and 20 miles northwest of Fort Collins. (see map below)

In addition to firefighters on the ground the fire was attacked by aircraft including at least one large air tanker (RJ85 Tanker 163) and a single engine air tanker.

#ElkFire Update – This is a map of the current fire area. pic.twitter.com/zBZYzKihyg

The fire has burned over 2,000 acres 15 miles southwest of Lake Tahoe in Northern California

I was first aware of the Caples  prescribed fire on the Eldorado National Forest when three tweets were published by the forest’s Twitter account on the afternoon of Monday October 7 saying, “Ignitions continue on Caples Prescribed Fire. More smoke is expected”. Photos taken from an aircraft by Forest Supervisor Laurence Crabtree also were Tweeted.

At that time there had  been news and discussions for several days in the wildland fire community about very strong winds and Red Flag Warnings that were due to hit California Wednesday October 9. Smoke from the prescribed fire was easily detected by a satellite October 7. It was a large amount of smoke to be generated by what was supposed to have been some burning debris piles.

It will be interesting to observe the #CaplesRx prescribed fire south of Lake Tahoe Wednesday night and Thursday. East winds predicted at 17 mph gusting to 28 mph. pic.twitter.com/2Gyo1YBt6D

The project began October 1 and involved disposing of debris piles by burning. Additional ignitions occurred on October 5 and 7.

Tuesday, October 8:  A tweet from the National Forest said, “The goal of today’s burn operation is continue active ignitions to reach the end of the ridge and tie into a dozer line that extends to the 10N30 road before the wind event that is predicted for this evening. No additional ignitions are planned this week.” And later that day, “Ignitions on the Caples Prescribed Fire have been completed and crews will patrol and monitor the area over the next few days during the wind. No additional ignitions are planned this week. ”

Wednesday October 9: “Today’s goal is to finish active ignitions to tie into the 10N30 road before the wind event now predicted for Wednesday night. Ignitions were intended to be done yesterday but due to unfavorable wind conditions during the day shift the operation is continuing today.”  And later that day, “Personnel on the Caples Prescribed Burn continue ignitions down the western perimeter of the fire towards forest road 10N30. A total of 1,080 acres have been treated, exceeding today’s target.” And later, “Ignitions are complete on the western end of the Caples Burn. Crews will patrol and monitor the area over the next few days during the wind event predicted to start this evening. Smoke will continue to be visible as the fire consumes unburned fuels within the fire perimeter.” And later, “The scheduled PG&E Power Outage has resulted in the closure of Eldorado National Forest offices except Camino ECC. Fire and essential personnel continue to work, however, forest offices are not open and phones are not operational until power is restored.”

Thursday, October 10: No additional information except for a Community Meeting scheduled in Pollock Pines that evening. One of the six items on the agenda was, “Brief updates on Caples Prescribed Fire and PG&E Power Outage”.

Friday October 11: “The Caples prescribed burn declared a wildland fire on today at 1:30 pm. Fire managers made the decision due to unfavorable weather conditions and the inability to meet previously established objectives. Inciweb is down. We will update when it comes back up.”

Today, October 11, personnel from the Eldorado National Forest report that the fire has burned 2,143 acres. It is 3 miles west of Kirkwood and 15 miles southwest of the south shore of Lake Tahoe. Approximately 152 personnel and a Type 3 Incident Management Team has been assigned.

Extreme fire behavior with wind driven runs, torching and spotting has been observed. A Red Flag Warning is in effect until 1000 this morning for the fire area. There is a threat to structures on remote ranches in the area. Private timberlands, major municipal watershed, historical sites and critical wildlife habitat are also threatened. Smoke impacts to the Sacramento Valley and Lake Tahoe areas are possible. Road, trail and area closures are in effect in the fire area.

Thanks and a tip of the hat go out to Fred. Typos or errors, report them HERE. 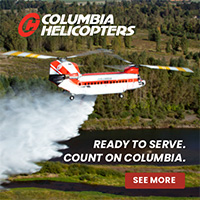