Above: Precipitation received at RAWS weather stations in northwest Montana in the 24 hours before 9:42 a.m. September 15, 2017. The amounts range from a few hundredths to almost half an inch.

Western Montana and the northern Great Plains are receiving some much needed moisture that will slow the spread of dozens of large fires in the area, some of which have been burning for more than a month and a half.

The Rice Ridge Fire has spread over 155,000 acres just east of Seeley Lake 35 miles northeast of Missoula, Montana since it was discovered July 24. The incident management team reported Thursday evening that the east side of the fire had received a quarter of an inch of rain. A weather station just northeast of the community of Seeley Lake recorded 0.05″ overnight, and the forecast calls for another quarter of an inch at that location on Friday.

A weather station near the 53,000-acre Lolo Peak Fire south of Missoula recorded 0.16″.

Some of the higher elevations in western Montana are receiving snow.

Firefighters are “backhauling” equipment on the Rice Ridge Fire, collecting items that are no longer needed and taking them back to the incident base, such as fire hose, water pumps, and portable tanks.

Most of the weather stations in the southern Black Hills where the Beaver and Rankin Fires are burning have received about a third of an inch of rain as of 10 a.m. on Friday, but one station northeast of Newcastle, WY measured almost three-quarters of an inch. Some firefighting resources, including crews and engines, were released from these two fires late in the day Thursday.

Herb Ryan of the Custer Free Press gave us permission to use these excellent photos he took September 13 at the Beaver Fire which is burning west of Wind Cave National Park in southwest South Dakota.

(More information about the Beaver Fire and the nearby Rankin Fire.)

The photo above is spectacular. It is a close-up of one of the most recently converted air tankers, an MD-87, dropping on the fire.

This is how he described getting the shot:

I was waiting for this and it broke out [of the] heavy smoke and this is the one full image I shot. Was on the back side of the fire with a Canon 7D and a 70-200 f2.8 on the camera cranked all the way down to 70mm.

The photos below are also courtesy of Mr. Ryan.

The photos above were shot on September 13 when there was a great deal of activity on the Beaver Fire. Today, September 14, firefighters are no longer battling a spreading fire, they are improving fire line, burning out, mopping up, and patrolling to make sure it does not jump up and run again.

Bill Gabbert took the next batch of photos September 14. (Click a photo to see larger versions.) 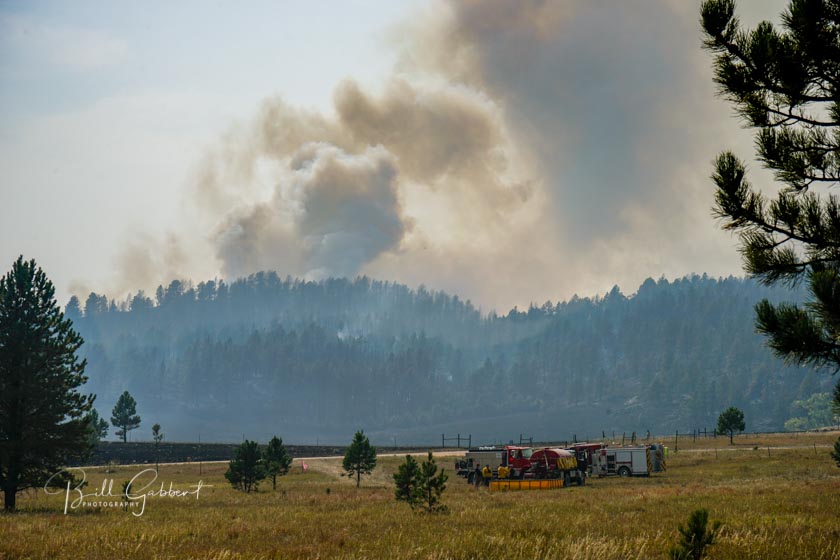 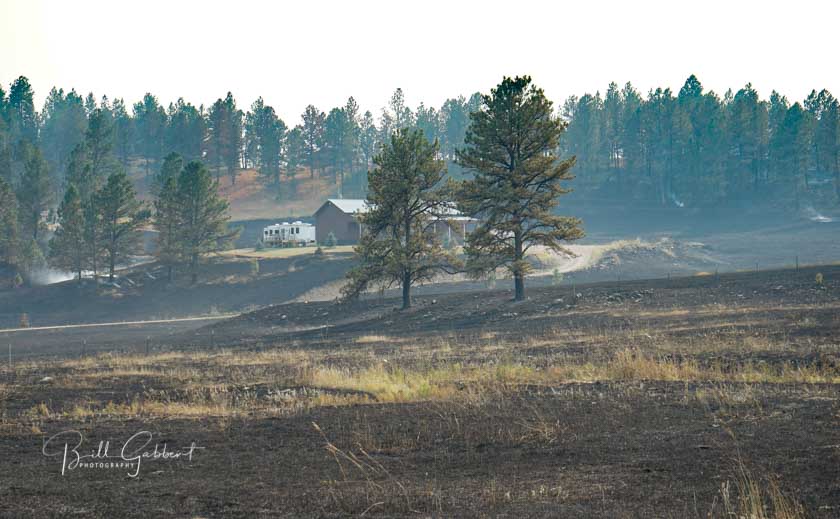 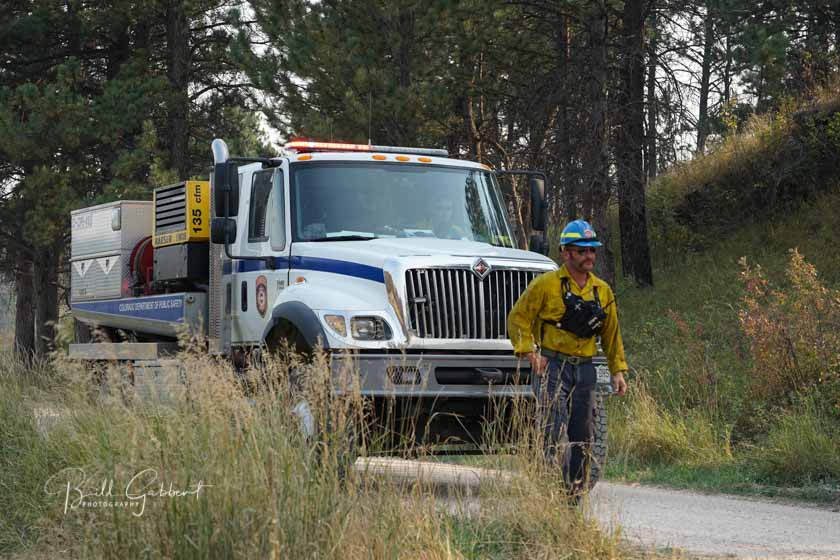 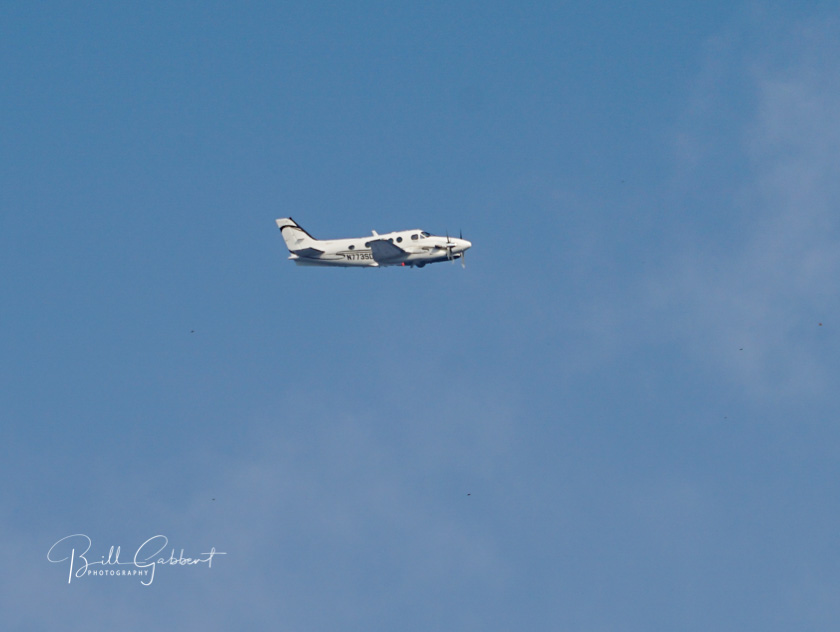 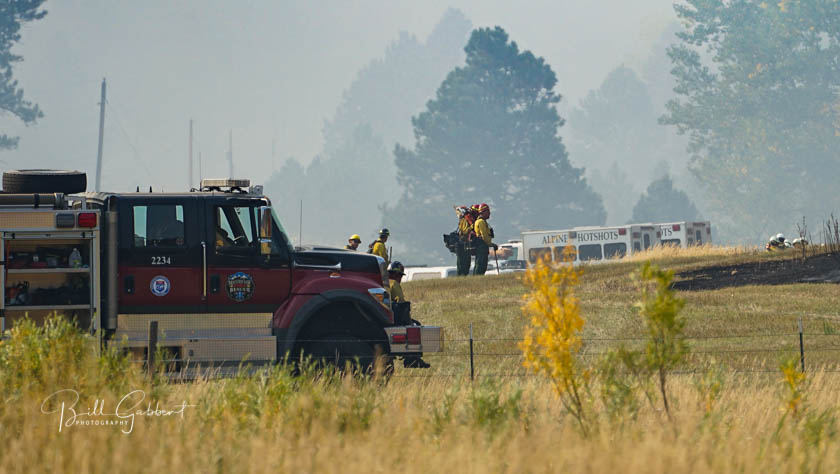 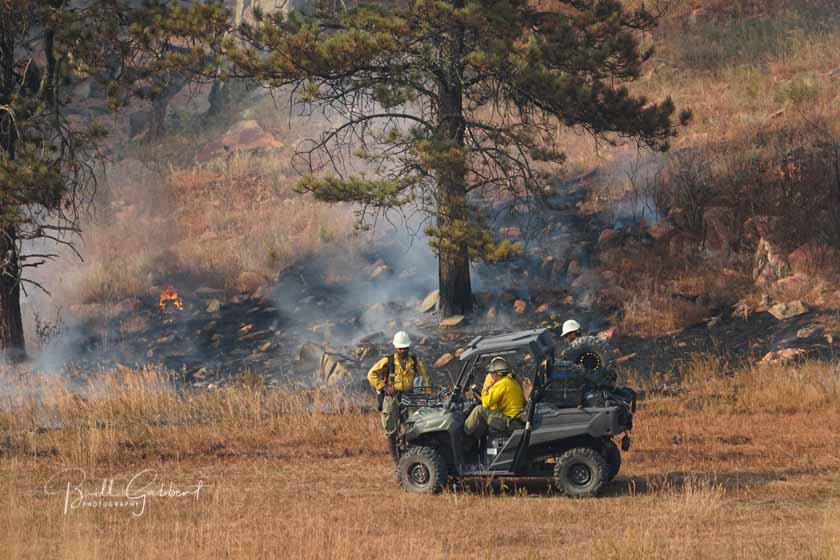 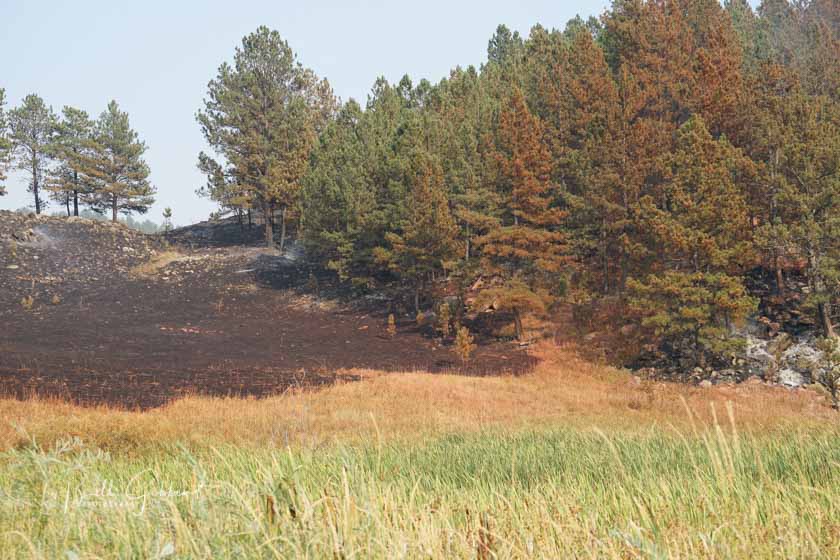 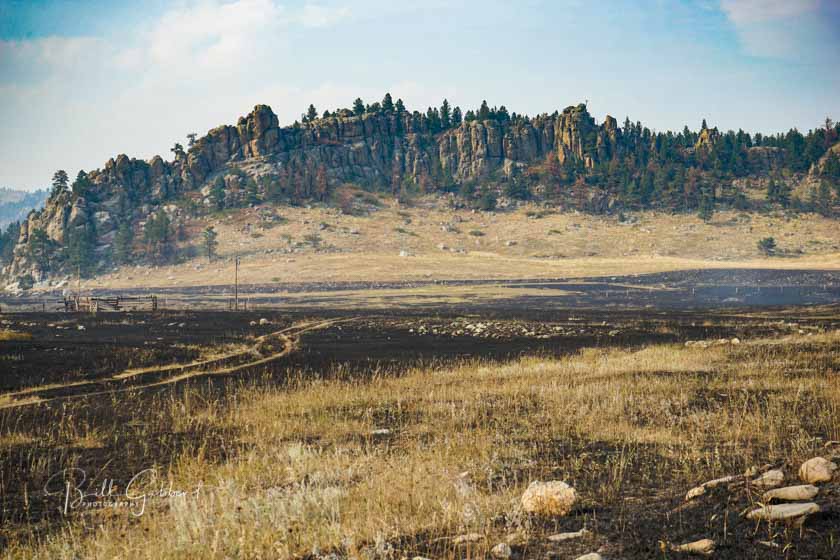 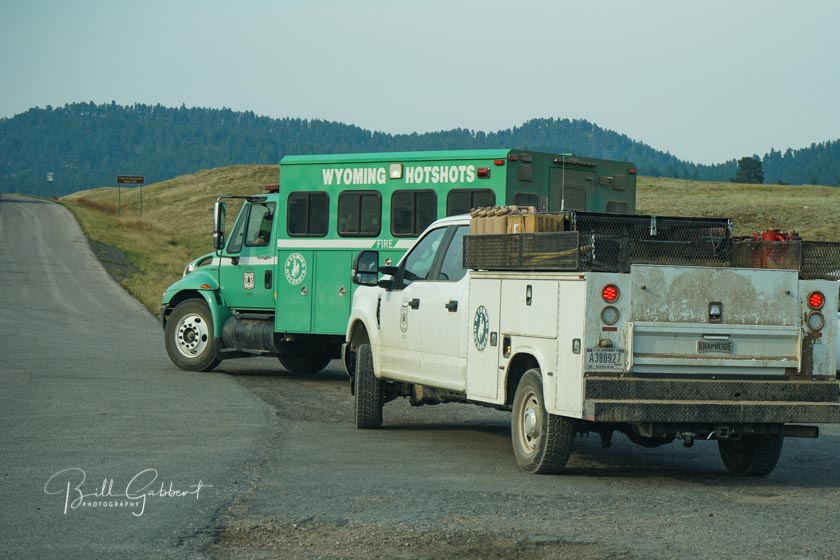 Above: An MD-87 air tanker maneuvers through the smoky air over the Beaver Fire just outside Wind Cave National Park, September 13, 2017. Photo by Bill Gabbert.

Thursday night there were enough openings in the clouds for satellites to get a pretty good look at the Rankin Fire in Wind Cave National Park in southwest South Dakota and the new fire first reported Wednesday afternoon west of the park, the Beaver Fire.

This new fire is near the intersection of Beaver Creek and Flynn Creek Roads in the Black Hills National Forest not far from the old Cold Springs School. It slowed overnight and Thursday afternoon was estimated at 350 acres. No structures are reported burned and the cause is still under investigation. At this time there are no mandatory evacuations. Firefighters will be conducting controlled burning operations on Thursday to help secure portions of the perimeter.

The size of the Rankin Fire is now estimated at 2,133 acres.

The map below shows the locations of the two fires. The red, brown, and yellow dots represent heat detected by a satellite. The red dots, the most recent, were seen at 3:37 a.m. MDT September 14, 2017.

The weather forecast for the fire area calls for a nearly 100 probability of rain Thursday night, with a chance of additional showers through noon on Saturday. The total rainfall could be more than 0.6 inch, which would be enough to slow the spread of the two fires to a crawl, at least temporarily, but not enough to put them out. It should reduce the smoke in the Pringle and Hot Springs areas.

Influenced again by erratic winds generated by scattered thunderstorms, the Rankin Fire in the northeast corner of Wind Cave National Park in South Dakota continued to grow Tuesday night and Wednesday, blackening another 432 acres to bring the total up to 1,192 acres, according to the Great Plains Interagency Dispatch Center in Rapid City.

More firefighters are pouring into the area as a Type 2 Incident Management Team is getting prepared to assume command of the fire Thursday morning. On Wednesday two large air tankers, converted MD-87 airliners, dropped water or retardant on the fire accompanied by two helicopters, a Bell 407 and a “Firehawk” Sikorsky S70A.

Another fire was discovered at about 2 p.m. Wednesday about 2.5 miles east of the Rankin Fire just outside the National Park boundary in the Black Hills National Forest. Named the Beaver Fire for the nearby road and creek of the same name, it grew rapidly as the MD-87’s and firefighters on the ground attempted to limit the spread. By Wednesday night it was estimated to have covered about 140 acres. It is four miles east of Pringle and 12 miles north of Hot Springs.

We saw two Hotshot Crews arriving at the fires Wednesday, the Craig and the Alpine Hotshots, both from Colorado, at about the same time a fire engine arrived from the Colorado Division of Fire Prevention and Control. Likely there are many other crews, engines, and logistical resources that have arrived or are en route.

(Click on a photo below to see larger versions. The captions are at the top.)

More photos of aircraft on the fire are at FireAviation.com.

On Wednesday the weather station at Elk Mountain in Wind Cave National Park recorded a high of 89 degrees, relative humidity in the 20’s, and southwest to southeast winds of 4 to 15 mph gusting at 16 to 28. Under those conditions wildfires are likely to continue to spread unless they run out of fuel.

The forecast Thursday for the fire area will not be as conducive to rapid fire growth since the humidity is expected to rise during the day from about 40 percent in the morning to over 60 percent by sundown, with the chance for rain increasing during that period from 6 percent to 39 percent. As the chance for rain continues, by Friday evening there could be about 3/10 of an inch of rain in the area with another 0.05 inch by Saturday night. The wind Wednesday night and Thursday will be from the northwest, north, and northeast, which could push smoke into Hot Springs.

A thunderstorm Tuesday afternoon prevented the acquisition of updated satellite mapping information about the Rankin Fire during the regular afternoon overflight, but during the next pass at 2:14 a.m. MDT Wednesday the clouds had dispersed.

For the most current information on Wildfire Today about the Rankin Fire, click HERE.

The map below shows additional fire spread detected by the satellite to the south.

There was a report that air tanker 101, an MD-87, was dispatched from Grand Junction to the fire on Tuesday.

The thunderstorm Tuesday afternoon brought strong winds to the fire area, that no doubt challenged firefighters who were attempting to limit the spread. The winds measured at Elk Mountain south of the fire were from various directions at 8 to 24 mph with gusts of 24 to 44 mph. When the storm passed over the fire the temperature dropped 15 degrees within an hour, from 95 to 80 and the relative humidity increased temporarily from 16 to 29 percent, but within three hours dropped back to 21 percent.

A weather station at Mount Rushmore, 17 miles north of the Rankin Fire, recorded 0.02″ of rain Tuesday afternoon, but there was none at Elk Mountain.

Monday night and Tuesday firefighters conducted burning operations from a mowed line, NPS 5, and trails to help secure portions of the perimeter.

Gusty winds from a slow-moving thunderstorm cell on Tuesday caused the wind to shift from the south to the north, sending smoke into Hot Springs during the afternoon.

The fire is east of Rankin Ridge fire lookout tower between Highway 87 and NPS 5. (NPS 5 is the dirt road running generally north-south that connects Highway 87 with the 7-11/101 road south of the park.

A Type 3 Incident Management Team has assumed command of the fire.

Currently the only closures in Wind Cave National Park are the northern segment of NPS 5 and all backcountry hiking trails north of Wind Cave Canyon. The park visitor center remains open with cave tours leaving from 9 a.m. to 4:30 p.m. throughout the day.

Here’s a map showing the location of the Rankin Fire in Wind Cave National Park as of 2:37 a.m. on Tuesday. The red squares represent heat detected at the fire by a satellite.

The Rankin Fire has burned approximately 300 acres as of Tuesday morning.

Monday night firefighters burned out from Hwy. 87 and NPS 5.

At noon on Tuesday the resources assigned to the fire, in addition to numerous fire engines, are one National Guard Blackhawk helicopter, one Air Attack, and a Single Engine Air Tanker is ordered.

Very little information about the fire is being made available.

A small thunderstorm passing over the southern Black Hills Sunday night left a souvenir that was discovered around 2 p.m. Monday. The Rankin Fire, caused by lightning, is burning near the Ridge and Lookout Tower of the same name, in Wind Cave National Park in South Dakota.

Spokesperson Kelsey Bean told us at 7:25 p.m. Monday that the fire had burned approximately 20 to 30 acres and no large air tankers had been used so far at that point, but a National Guard Blackhawk helicopter and two single engine air tankers (SEATs) assisted firefighters on the ground. The SEATs came from Casper and Cody, Wyoming.

Nine fire engines from state and federal agencies were on scene this evening and more had been ordered, Ms. Bean said.

We will update this article as more information becomes available.